During lockdown many people turned to the home and the garden to make improvements. It’s hardly surprising – spend more time in the house, and you notice more things that need doing, you start coming up with ideas, and find home improvement tasks that can’t be put off by simply going out for the day. So: lots of door painting, brass polishing, putting pictures up and the like. For the more ambitious, there have been structural works. Over the road from us, the neighbours have got scaffolding up and I’m pretty sure they are working on the front walls of the house themselves at the moment, scraping off the years of paintwork, hoping (I guess) to reveal some beautiful original facade. Gardening, too, of course, has intensified, especially given the amazing weather we had, the days and days of blue sky. People have been getting their decking redone, pulling up old boring plants, bramble and nettles replaced with, I don’t know, turf and a new (already half-dead) palm tree bought in Morrisons. I had a rough idea all this was going on from posts seen on social media, conversations with colleagues and friends etc., but yesterday I went for a walk which really confirmed it.

In the area of Plymouth where I live, the houses are all laid out in terraces, with little gardens out the back, and a service lane between our back gate and the back gate of the house on the other side. The primary function of this road is rubbish collection, as far as I can tell. Every house has a brown rubbish bin and a green recycling bin, which are collected on alternate weeks by the council, and the bin lorry shoots up or down the narrow road. It’s quite rare to see people ever walking down these service lanes, and yet they take up a relatively large amount of public space in the area. The main reason you wouldn’t want to walk along these roads is that the smell of the bins can be overpowering, especially on a warm day, and they tend to be a bit ugly and messy, in spite of the wild flowers and weeds that have been allowed to grow. 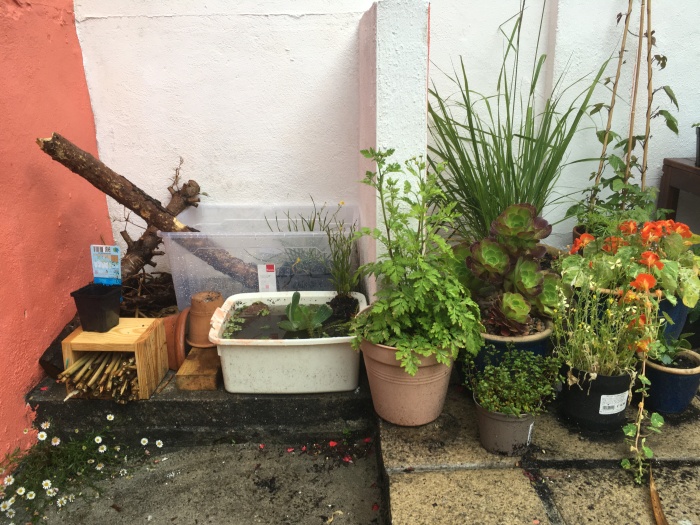 Having just read Dieter Helm’s Green and Prosperous Land, I was feeling invigorated by his infectious optimism about what we could all do collectively to save the natural world from ruin. Putting aside arguments about regenerative vs sustainable, and whether we even need economic growth at all, as well as the much more pressing problem of modern agriculture and its state frameworks, oh and the need to set our sights closer than 2050… setting these aside for now at least, I wanted to get stuck in and contribute to biodiversity in my own small enclave of the city. I decided, with the help of this Wildlife Trust webpage, to make a small (well, miniature) pond in the garden, having read that it is one of the best things we can all do to help wildlife (if we are lucky enough to have a garden). A washing up bowl, an oxygenating plant or two, and a decent period of rainfall, is all it takes.

Having met these basic requirements without too much trouble, I then set about wanting to make my washing up bowl more practically useful for wildlife. It’s good to create a ramp out of some old bits of wood and bricks and rocks and so on, and I wanted to make an insect hotel as well, to give any new insects a nice place to stay nearby. The temptation, when you need something, is to think, what shop should I go to? In this case, the garden centre was the obvious choice, or maybe the supermarket. But it turns out there was no need. The service lane at the back of our house was clearly a better place to start. I noticed that many people had chucked old clumps of garden waste, bits of wood, broken pots and so on out the back. So I grabbed a bag and went for a speculative walk.

I walked down our own service lane and then crossed the “real” roads a bit, to get to more service roads, and discovered an absolute treasure trove of stuff. Lots of old delivery crates, bamboo canes, the remnants of a recently destroyed wall, neat piles of unwanted bricks, unwanted rotting logs. It wasn’t in the bins, it was just thrown carelessly aside, blocking the road, left to rot. I came back with enough stuff to make the new pond area much more practical for wildlife. The best was a small, dead evergreen tree of some kind, that now forms the main ramp up to the lip of the pond. Without wanting to sound preachy, I did all this without spending money, or crucially, having to buy stuff with its own plastic packaging and labels, or having to drive somewhere to get it.

This to me feels like the answer for many things in the garden, and a sustainable way of doing things. It doesn’t feel particularly nice, walking through these mucky backstreets, and I was slightly worried about the possibility that the things I was picking up were infected in one way or the other – but as long as you have gloves or at least use common sense and wash your hands afterwards, there’s no need for major concern. Of course, you should ask permission if you are taking something that is clearly connected with one house or another, as they might just be storing it out there temporarily. But in many cases, the stuff was clearly abandoned.

Why shouldn’t we use these wasted materials? We should. It will only end up in landfill otherwise, or a great deal of energy would need to be used to recycle it into some new product that people would want in shops and garden centres. It left me thinking, what if everyone was asked to create a small pond in the garden out of an old plastic box or washing up bowl or whatever. How many old washing up bowls are out in these backstreets lying disused and unloved? How many bricks and rocks and planks of wood, or old bits of garden waste are out there? It’s stuff that is going to waste, that would be really useful for people to improve the biodiversity in their own urban areas. All it takes is a short trip out with a bag, and a dose of courage, and maybe a nose peg.