This gig might have fallen into a few traps in the faintly sterile space of the lecture room-cum-performance space of the University of Plymouth’s Sherwell Centre, but for a free gig in straightened times one keeps an open mind. And I’m glad I did because great performances on saxophone, bass and drums took us on an eclectic, time-travel adventure through jazz. Steve Buckley opened the gig by confessing or rather asserting that the three had never played together before. This, he said, is exactly what jazz is about, putting forward a definition that it’s not the music, but the spirit in which that music is approached that makes something jazz, the spirit of playing around with what already exists and finding common ground amid differences. 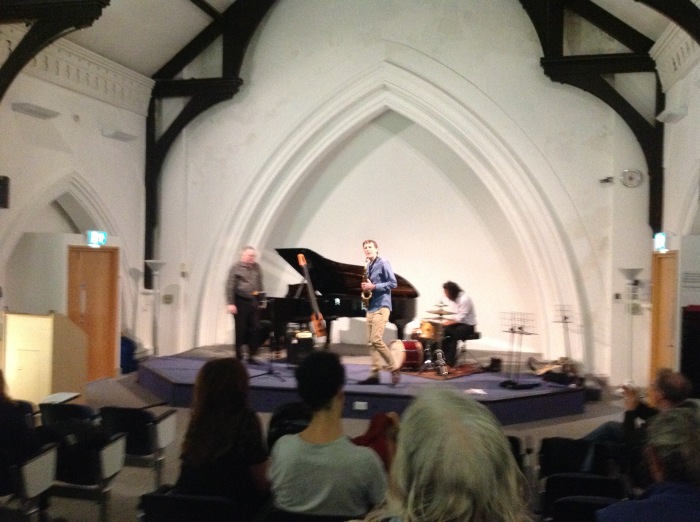 You might say it is better not to try to define what jazz is before you start playing, and let the playing speak for itself… but actually Steve led his trio, who began by feeling their way somewhat, into a very pleasant hour of music. They covered an ambitious programme of tunes from Coltraine to Ellington to Monk, which did match up to what he said. From the off Steve made his alto sax pick up a rich, lyrical tone, with beautiful embellishments to Crescent, his melody lines running around, up and over the expected in a continuously inventive way, switching back and forth between major and minor with effortlessness.

But it was not, I felt, until they got to about their third number that the trio really started to gel – understandably, and this process was fascinating in itself to watch – as they wallopped into a rendition of Jitterbug Waltz by Fatz Waller with energetic freshness. This song brought out some well worked improvisations from the drummer Ric Byer, whose bare left foot you could see working his high-hat pedal incessantly. He seemed to set up the down beat and then go for miles away from that beat only for it to return, bang on where the brain said it should be. I liked that he was not afraid to throw in the odd unexpected snare hit to roughen up the sound. He made the most of the possibilities of timbre in his kit too which was made of wood.

They went from strength to strength actually and hit a high point a little later with a warm, rich rendition of Monk’s – was it Monk’s? – on-stage uncertainty – wasn’t it a collaboration? – ’Round Midnight. [Monk did compose this piece himself in the early 40s, possibly earlier, but Cootie Williams is often credited for the embellishments he added on trumpet, while lyrics, when needed, are attributed to Bernie Hanighen.] In this piece all three players found a kindred spirit, that shared connection Steve had referred to earlier. Not just in the music, which they were all clearly familiar with, but the spirit in which they personally were going to play it. They had by now got the measure of each other and evolved into a single unit out of the three. They finished and immediately there was a collective desire for more Monk, instantly satisfied.

The trio ended on an unusual piece by the underrated, ever-distinctive Arthur Blythe. I sensed the group’s ambition in trying to pull this off at the first go and they certainly made a good stab at it. David George, always dependable on his so called ‘single’ bass – a sort of electrified and much more transport friendly version of the double bass, played upright – managed a nonchalant march through the bassline (and only slightly encumbered by the ipad) that interacted with the drums in a crunching, marked rhythm. These two built up dramatic rostrum from which the sax could shoot off when they cut out. It was a delight to hear this piece, which you wouldn’t be likely to at your average regional jazz club. It added a new dimension to round off the gig, in which the adventure, so call it, went to new places and musical experiences as well as reawakening some old.

The gig was organised by Peninsula Arts, who have put on a whole week of events, exploring new music from faculty and students of the Department of Music at Plymouth University. It was great to get the chance to see such high quality music for free(!) in the city.